About our faculty and their research… 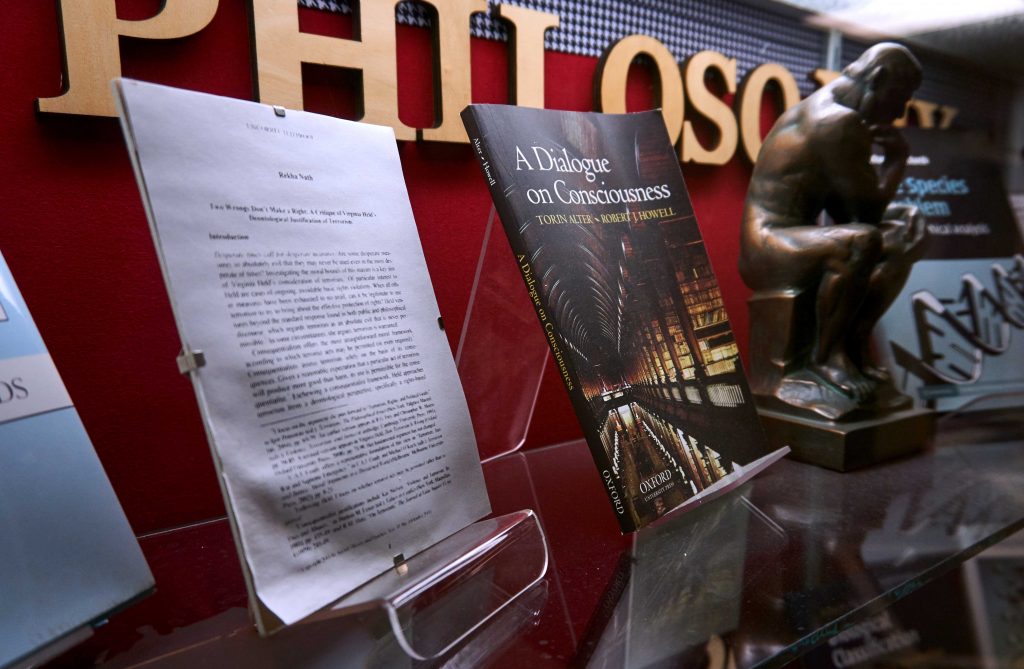 Torin Alter writes mostly about consciousness and its relation to nature. Representative publications include “The structure and dynamics argument against materialism” (Nous 50, 2016: 794–815), “Social externalism and the knowledge argument” (Mind 122, 2013: 481-96), Consciousness in the Physical World: Perspectives on Russellian Monism (co-edited with Yujin Nagasawa, Oxford University Press, 2015), and A Dialogue on Consciousness (co-written with Robert J. Howell, Oxford University Press, 2009).

Seth Bordner’s research spans a range of areas and topics. His main research program focuses on the immaterialist philosophy of 18th-century Irish philosopher George Berkeley and its development out of Berkeley’s peculiar views about language. In addition, Dr. Bordner has interests in the philosophy of science (concerning the realism/anti-realism debate and the value of theoretical simplicity), the philosophy of sport (concerning the use of technology in officiating and the use of statistics in ranking teams), and in the intersection of metaphysics and value theory (concerning the implications of determinism for certain accounts of harm). His work has appeared in Journal of the History of Philosophy, Synthese, and the Journal for the Philosophy of Sport.

Luke William Hunt’s research interests are at the intersection of philosophy of law, political philosophy, and criminal justice.  His first book, The Retrieval of Liberalism in Policing (Oxford University Press, 2019), provides an account of how law enforcement in liberal societies has become illiberal in light of its response to internal and external threats to security.  His second book, The Police Identity Crisis — Hero, Warrior, Guardian, Algorithm (Routledge, 2021), examines the police role and identity from within a broader philosophical context, arguing that prominent conceptions of the police are inconsistent with a collective conception of justice.  His papers have appeared in Law and Philosophy, Ratio Juris, Human Rights Quarterly, Polis, Criminal Justice Ethics, and the Washington University Jurisprudence Review.

Scott Hestevold is finishing a book on space: Toward a Directional Theory of Location (under contract with Lexington Books). Hestevold argues that, by assuming that the world is absolutely directioned (i.e. that objects bear specific directional relations to one another), one can extend Leibniz’s relationalist theory of space in such a way that one can avoid ontological commitment to absolute space and preserve absolutist presuppositions about the possibility of uniform motion, inverted spatial orientation, and forces generated by absolute motion. After using the directionalist/relationalist theory to forge solutions to metaphysical problems involving boundaries, holes, and the composition of objects, Hestevold addresses the implications of the directionalist/relationalist theory for findings of modern physics that suggest that absolute spacetime exists.

Holly Kantin’s research is primarily in metaphysics, ethics, and bioethics. She is currently working on various philosophical issues that arise concerning mental disorders, including the ethics of allowing physician-assisted dying for individuals suffering from mental disorders. Her research in metaphysics focuses on the ontology of material objects and personal identity. Her work has appeared in Philosophy and Phenomenological Research, Synthese, and the Cambridge Quarterly of Healthcare Ethics.

Much of Ben Kozuch’s research occurs at the intersection of the philosophy and neuroscience of consciousness and has consequences for issues concerning animal and infant awareness and the neural basis of consciousness. His work appears in prestigious journals such as Philosophical Studies, Mind and Language, and Erkenntnis. Recently, Dr. Kozuch spent a semester in Paris at the Centre National de la Recherche Scientifique (National Center for Scientific Research), working on a project concerning the cognitive requirements for consciousness.

Rekha Nath specializes in political philosophy and ethics, focusing in particular on issues concerning global justice, equality, and responsibility. Representative publications include “Equal Standing in the Global Community” (The Monist, 94.4, 2011), “Against Institutional Luck Egalitarianism” (Journal of Ethics & Social Philosophy, 8.1, 2014), and “On the Scope and Grounds of Social equality” (in Social Equality: Essays on What It Means to be Equals, Oxford University Press, 2015). She is currently working on a paper on cosmopolitan distributive justice for a collection of essays on John Rawls as well as a book manuscript on the injustice of weight stigma.

Ted Poston specializes in epistemology, philosophy of science, and philosophy of medicine. He has published over thirty articles, written two books, and has several edited volumes. His research revolves around questions about rational belief. His first book Reason and Explanation argues that explanatory reasoning undergirds many of our justified beliefs. He has continued to develop his explanationist position in a number of papers. He has applied explanatory reasoning to epidemiological inference with an epidemiologist at Tufts University. His second book A Contemporary Introduction to Knowledge How is on the nature of practical knowledge. He surveys the current debate over practical knowledge and argues that practical knowledge is special and distinct from theoretical knowledge. His current research is focused on the relationship between Bayesianism and explanatory coherence. 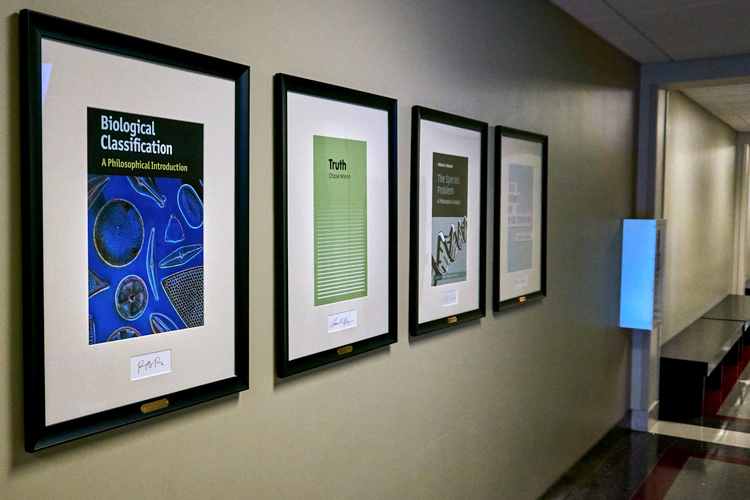 Stuart Rachels specializes in ethical theory and has written on topics that include euthanasia, vegetarianism, and egoism. He is the editor for two widely read textbooks “The Elements of Moral Philosophy,” and “Problems from Philosophy,” with first editions written by his father James Rachels.

Richard Richards works in two areas: the history and philosophy of biology, and aesthetics. For the former, he has written articles on Darwin, phylogenetic inference, evolutionary ethics and more, as well as two books on biological systematics: The Species Problem: A Philosophical Analysis (2010), and Biological Classification: A Philosophical Introduction (2016), both published by Cambridge University Press. In aesthetics, he has written articles about the evaluation of art and engineered art niches. He has just finished a third book with Cambridge University Press titled The Biology of Art.

Chase Wrenn’s research focuses on issues concerning truth’s nature and its role as a value in our thinking.  His first book, Truth, published in 2015, evaluates classic and contemporary theories of truth, with special emphasis on how well they account for truth in science and ethics and how well they account for the value of true belief. He is now working on a second book, The True and the Good: The Moral Basis of Truth’s Value, which defends the view that it the desire for truth is a moral virtue, irrespective of how we understand the nature of truth. Dr. Wrenn’s most recent and upcoming published articles include “A Plea for Immodesty: Alethic Pluralism, Logical Pluralism, and Mixed Inferences” (in Pluralisms in Truth and Logic, Palgrave Macmillan) and “Alethic Pluralism and Truth-Attributions: A Dilemma” (in American Philosophical Quarterly).