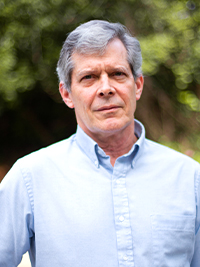 Dr. Richard Richards first joined the department in 1997, and has served as chair since 2015.  His specialties are the philosophy of science, the history and philosophy of biology, philosophy of medicine and aesthetics. Has been involved in the Blount Scholars Program, in both the planning of curriculum and teaching.

Dr. Richards is the author of three books: The Species Problem: A Philosophical Analysis, Biological Classification: A Philosophical Introduction, and The Biology of Art, all with Cambridge University Press. He is currently working on a book titled, Naturalized Aesthetics: A Scientific Framework for the Philosophy of Art, under contract with Routledge Press.  He has published articles in the journals Philosophy of Science, History and Philosophy of Science, Perspectives on Science, Journal of Aesthetics and Art Criticism and more. He has chapters in The Oxford Handbook for the Philosophy of Biology, The Cambridge Companion to the Origin of Species, The Harvard Companion to Evolution, and The Cambridge Handbook of Evolutionary Ethics.

Other interests include the performing and fine arts. He has performed professionally with major ballet companies in the United States and Europe. His paintings and drawings are held in private collections, as well as the Museum at Yosemite National Park, where he has served as artist-in-residence. He currently enjoys competitive ballroom dancing and Argentine tango with his wife Rita Snyder, Associate Professor of Dance at The University of Alabama.